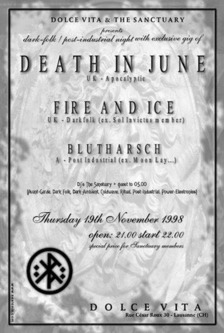 A severe case of censorship occurred some days ago in Lausanne, Switzerland. Ther fact: the performance of Douglas Pearce of Death in June, scheduled for thursday 19th November in “La Dolce Vita”, Lausanne has been forbidden by the municipal authorities and the police of Lausanne, the reason being the ambiguity of the band.

According to Douglas P., who gave a press conference the day before the cancelled show in “La Dolce Vita”, this is the first time ever that Death in June are censored and, you like them or not, this represents a severe breach of some basic rights such as the liberty of performing, the liberty of expression in general and ultimately of the freedom of speech. This is unacceptable.

The “saga of ignorance” has been triggered by an association of morons based in Bern who disguise themselves as “anti-racist”, fuelled, as usual, by the local reactionary press and topped by the chief of the police of Lausanne, Mr. Bernard “The Big Hand” Metraux. Now, police and journalists are dumb arses by definition, and equipped with some of the finest crafted dumb brains, but those going under the name of “anti-racist” are supposed to have an higher IQ to play with.

On a more general scale of interest, it is also well known that such reactionary units active in Switzerland, and probably elsewhere, consider the whole gothic and darkwave movement as a big plot to restore nothing less than the far right ideals. There is a black list of bands they are ready to pick on and chances are that, if immediate action is not taken, this is the first of a long list of censorship actions. This is unacceptable, whether or not you sympathise with the art of Death in June. It is the gothic culture which is being attacked in general, for ignorance and for the everlasting habits of certain people of insisting in mixing issues which have nothing in common.

A detailed account of the events is available on the website of the Swiss gothic association “The Sanctuary” (http://www.sanctuary.ch/report/DeathInJune) who have organised the gig. Please visit the site before jumping to quick conclusions about this case. Those of you who feel concerned by issues involving the basic rights of expression, please write to “The Sanctuary” (asso@sanctuary.ch) or to Bernard Metraux (police@lausanne.ch) expressing your point of view and suggesting possible actions or precautions in order to prevent further unjustified attacks of intolerance from authorities and morons in general.

For the records, the club was packed anyway as Blutharsh and Fire and Ice performed fine and Boyd Rice was extensevely cheered at as he appeared on stage in mimetic and mask as if he were Douglas P. Many believed for some moments he was Douglas P. indeed. He had severe words against authorities. A petition asking resignation of Bernard Metraux for the incompetence and intolerance he used in handling this case was signed by about 100 people at the club only. Legal action could be considered as well and any advice is welcomed.

Finally, I would like to stress that the association I represent is not involved and doesn’t accept any form of political or religious propaganda and, in the light of this, this incident is even less ucceptable.

Please distribute this message to whom might be concerned