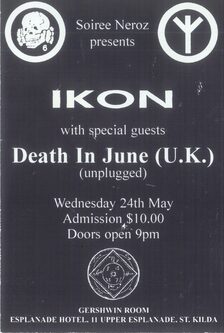 As far as I know this gig was pretty much unadvertised, but I heard about it from a friend and was quite surprised to hear about it only 4 days before the gig. Death In June were to play at the Esplanade Hotel in one of the backrooms, opening for local band Ikon. A crowd of around 150 had turned up to hear Death In June perform an acoustic set.

We turned up pretty early to find Douglas P. setting up behind the stage, so we sat, drank and watched him. After a while he came to the front of the stage and lit a stick of incence below his mike stand. Minutes passed, then Douglas returned to the stage with John Murphy, both men masked now; John with his leather hood and Douglas, not wearing his usual white mask, but a helmet with a veil of green strings obscuring his face.

Walking on to the “Ku Ku Ku” noize intro (as heard on the Heilige! CD), they opened with Ku Ku Ku, then played through classics such as Runes and Men, Fall Apart, Kameradschaft, Giddy Giddy Carousel, Little Black Angel and others from their great history (but nothing from Operation Hummingbird) Douglas P’s vocals sounded better than any recording and John Murphy is an amazing drummer; together they hypnotised us for around three quarters of an hour before walking off into the audience…

The atmosphere was so relaxed to the point where whilst standing waiting to be served at the bar, I found myself standing right next to Mr P..

Not that I said anything to him, I mean, what do you say?