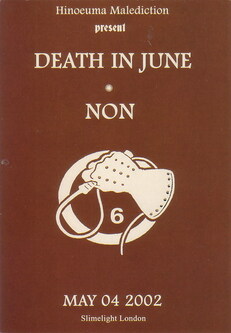 Tonight marked the return of Death In June and NON to London, and the first since Death In June’s much publicised schism with their former distribution partners World Serpent.

The show itself was a major scoop for London’s Hinoeuma noise club taking place at its alternate venue, the Slimelight. The Slimelight’s low ceiling seemed quite appropriate lending the evenings proceedings a sort of bunker mentality. Skinheads, Torture Garden fetishists and a mixture of London’s alternative set had turned out to see, according to the Guardian’s listings anyway, Douglas P’s revered and eclectic industrial band.

The night began with a rare screening of Richard Wolstencroft’s Pearls Before Swine. This ultra-low-budget Australian film stars Boyd Rice as Daniel Wingrove, assassin and author of the psychosexual tome Pure. It’s Boyd’s first major acting role after his previous endeavours in Allison Anders’ Grace of my Heart became destined for the cutting room floor. Unfortunately bad planning resulted in the film being screened at the back of the stage obscured by the band’s equipment. Why they didn’t use the Slimelight’s in-house monitors remains unknown. Despite these misgiving the film looks quite amusing. Boyd’s spanking scenes certainly raised a smirk and the dialogue featuring Boyd discussing the merits of the BBC’s series Doctor Who over the America’s Star Trek was certainly off the wall! Douglas P. takes a small cameo as Martin Gough, a bookseller of erotic tastes.

The sound of thunderous timpani drumming heralded the arrival of Boyd Rice. “Do You Want Total War?” he exclaimed, once again. Dressed head to toe in leather sporting Wolfsangle symbols and a Cross of Lorraine pendant around his neck Boyd certainly has visual presence. The live sound of NON is remarkable in its simplicity. A small portable effects box allows Boyd intonations to echo and reverberate throughout the room. The piercing shriek of a whistle jettisons its way across the room. John Murphy’s powerhouse percussion lends the music a martial feel. It’s a powerful and effective short set. ‘World Collide’ and ‘Everlasting Fire’ follow in succession, as Boyd reads from his Book of Words.

Boyd’s such a multi-faceted individual that one only wishes that he’d let London audiences witness other aspects of his character. Let’s hear him spin some old tunes, treat us to a Spell performance. It’s not much to expect from one who shares the same bloodline as Christ.

Rare promotional videos of Death In June, and several airing of a worryingly catchy Death In June remix of Der Blutharsch preceded the arrival of Death In June. The sound of pig squeals emanated from the speakers as John Murphy took to the stage, masked and hooded. Douglas P. soon followed waving a flag emblazoned with a Totenkopf, the Death’s Head motif. In his camouflage smock and mask it was evident Douglas was in no mood to suffer fools. Tonight he meant business. ‘Till The Living The Flesh Is Burned’ was quickly followed by ‘C’est Un Rêve’ and ‘Death Is a Drummer’. The powerful atmospheric tracks, augmented by handbells and percussion provided ideal cover for Douglas’s refined intonations.

Now wearing an SS snipers mask Douglas switched to guitar and launched into an excellent set culling tracks from all major Death In June releases. This really was a ‘Best Of’ set: ‘She Said Destroy’, ‘Behind the Rose (Fields of Rape)’, ‘Runes and Men’, and ‘Kameradschaft’.

Tonight as a duo John Murphy’s percussion excellently supported Douglas’s simple melodic guitar lines. Cymbals crashed (and shattered!), above the thunderclap of timpani drums. With such sparse orchestration the sound could easily be weak and timid but Death In June live remain an invigorating and powerful proposition.

Throughout the night there were sly references to Osama Bin Laden and the Taliban terror outfits. Only a fool could have missed the veiled references within ‘She Said Destroy (In Black New York)’ alongside the switching of names in ‘C’est Un Rêve’ Even ‘Death of the West’ slipped in references. Perhaps Douglas has found the terror attacks in the USA have given Death In June fresh relevance. Throughout his career Douglas has made reference to Hitler and the SA and how they shaped the world we are living in. It’s possible that he now views Bin Laden and the Al Quaeda network in the same way.

At certain points in the evening Death In June were joined by Boyd Rice. At one point Douglas even seeped into a perfect Aussie accent. Strewth! Boyd’s distinctive spoken vocal graced a number of the simple melodies from All Pigs Must Die. It was clear that Douglas (and Boyd) still feel aggrieved with World Serpent. It’s a business issue, and one they should settle in private.

Other tracks aired on the evening include ‘Leopard Flowers,’ ‘Hollows of Devotion’ and ‘Rose Clouds of Holocaust’. This was a near-flawless performance split evenly between pathos and passion. An out-of-tune guitar marred the opening bars of ‘Heaven Street’. Once aborted it allowed John Murphy a few moments to improvise on the drum kit. Douglas imparted some cryptic comments to the effect that it started in London 21 years ago and it’s only right it should end as it started. This was further compounded by a “Goodnight, goodbye and probably good riddance.”

Of course, the crowd thought otherwise. Boyd Rice retook the stage with his friends and for a loose rendition of ‘People’. Those already departing the building swiftly about turned as the misanthropic trio – Pearce, Rice and Murphy – delivered one of the finer points from the seminal Music, Martinis and Misanthropy. It was heartwarming to hear Boyd Rice recite those sentiments and it became quite apparent that we’re still in need of some brutal gardeners.