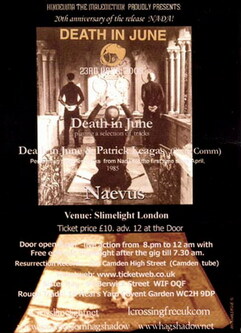 Death In June concert are always worth attending – they have this certain feeling of being ‘special occasions’, even though they’re practically a yearly event in London. This one was of particular interest due to the return of Patrick Leagas to the band’s line-up for one night only, to celebrate the 25th anniversary of the release of ‘Nada’ album, one of the most loved and most diverse discs in the bands’ sizeable backcatalogue. Patrick’s own work as Sixth Comm had, despite some promising concepts, proved only to be a footnote to this story, whilst Death In June’s development since then is a story long enough to be left until later.

But before any of this, we had a performance from Naevus, a band whose name I’d seen in print a few times but had not to date heard. The first song caught my attention, with both electric and acoustic guitars, bass plus some really militant drumming from John Murphy. Unfortunately, the rest of their set was altogether more sedate, with the drumming either toned down or absent from each subsequent song. This made the Naevus sound rather turgid after a while, none of the songs on offer really sparking the imagination. There were a few moments where I was reminded of Death In June’s very first album (‘The Guilty Have No Pride’) and one song made a reasonable job of creating a Swans-like wall of guitar noise. But for the most part, Naevus failed to really make an impression.

Anyway, we were all really here for Death In June, playing a full set with Patrick Leagas for the first time in many years, though those who were lucky enough to be there will remember Patrick cameoing with ‘The Calling’ during that memorable night on the HMS President on a rainy November night in 2003. That night, the set was entirely acoustic. This time, we saw a collection of drums, handheld percussion, Doug’s acoustic guitar plus (unusually) a Powerbook and keyboard, obviously brought in due to ‘Nada’s status as one of Death In June’s more electronic albums. This also meant tonight’s set was dominated by very old songs, as the collective kept to the songs that both Patrick and Doug had worked on many years ago.

There were no antics with sniper veils or white masks this time, so the trio dutifully got down to what must be a very rare rendition of ‘The Honour of Silence’. Only it was clear that Patrick was nervous, looking uncertain as to whether to sing, bang the drum or play the keyboard. This tension lasted a few song, but he eventually got into the swing of things. When the collective gelled, the resultant sound was really quite impressive – ‘The Torture Garden’ went down particularly well with the backing electronics, while the percussive fury of ‘Till The Living Flesh is Burned’ bore extra brunt tonight thanks to the additional member.

‘She Said Destroy’ sounded as good as ever, but the highlight for me was the airing of the ‘The Calling’ at the end of their set – one very rarely gets a dance beat at a Death In June show these days, but to get an airing of one of the few Death In June songs that’s made much of a mark on the UK scene beyond the neo-folk collective made attendance worthwhile. There were two encores – the first including the ‘new’ version of ‘C’est Une Reve’, complete with the ‘Ou-est Bin Laden’ soundbite. The second encore featured Douglas P and John Murphy only, playing three further songs (including ‘Leopard Flowers’ but none of their more recent favourites), before the show came to a close.

I have to admit that I felt a bit short-changed at this point – I was under the understanding that Death In June would play ‘A Selection of Tracks’ after the Patrick Leaglas re-union, and I sort of assumed that we’d get more than three. But never mind, the show served it’s key purpose – the re-union of two of neo-folks key names, and the live tribute to what was a classic album. I do wish they’d stop playing in Slimelight, though – nice as it is to get free entry to the club (not that I stayed for more than ten minutes), it’s pretty weak as a live venue. Unless of course, it’s because none of the other venues around London will take them.